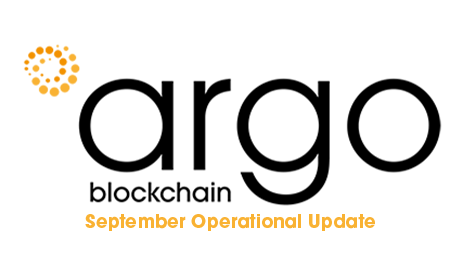 During the month of September, Argo mined 215 Bitcoin or Bitcoin Equivalents (together, BTC) compared to 235 BTC in August 2022. The decrease in BTC mined is primarily due to a 12% increase in average network difficulty during September. Additionally, the Company is continuing to curtail operations at its Helios facility in Dickens County,Texas during periods of high electricity prices.

As of 30 September 2022, the Company held 512 Bitcoin, of which 167 were BTC Equivalents. The Company closely monitors market conditions and is actively using a variety of derivatives to manage BTC holdings and mitigate risk exposure.

Based on daily foreign exchange rates and cryptocurrency prices during the month, mining revenue in September amounted to £3.78 million [$4.27million*] (August 2022: £4.39 million [$5.23 million*]). Argo generated this income at a Bitcoin and Bitcoin Equivalent Mining Margin (Mining Margin) of 25% for the month of September (an increase from 20% in August 2022).

The Company currently has 2.5 EH/s of total hashrate capacity and expects to complete the installation of its BitmainS19J Pro machines by the end of October 2022. After accounting for the sale of 3,400 mining machines to a third party that was reported on 7 October 2022, the Company now expects to achieve a total hashrate capacity of 2.9 EH/s once the installation is complete.

Effective October 15, Perry Hothi is stepping down from his role as Chief Technology Officer at Argo and will serve as a transitional advisor to the Company. The technology function will be led by Jean Esquier, who currently serves as Vice President of Technology and Development.

In addition, the Company is excited to welcome Jason Zaluski to the team as Vice President of Mining. In this role. Jason will strengthen the Company’s coreteam and focus on optimising operations of Argo’s mining fleet. Jason brings tremendous experience in blockchain technology and Bitcoin mining, having previously worked at Hut 8 Mining as Vice President of Strategic Technologies.

Peter Wall, Chief Executive Officer at Argo, said: “As another month of high energy prices and uncertain market conditions ended, Argo continues to execute on its plans to grow operations at Helios. We are nearing completion of the installation of our new Bitmain S19JPro machines, which will increase our total hashrate capacity to 2.9 EH/s by the end of the month. This will represent a 81% increase in total hashrate capacity since Q1 2022. I continue to be proud of our team for its efforts to deliver long-term growth in the interest of our shareholders."

“Additionally, I’d like to thank Perry Hothi for his long years of service and great contribution to Argo,” Wall continued. “Perry has been with us from the very beginning, and I wish him well as he moves on.”

Perry Hothi, Chief Technology Officer at Argo, said, “I've decided to leave Argo because I believe the technology team is ready. I have accomplished everything I set out to do at Argo. Working with Jean and the rest of the technology team these last few years has been a once in a lifetime experience. I’m deeply grateful for their skill, heart, and friendship. It is their time now.”

Bitcoin and Bitcoin Equivalent Mining Margin is a financial measure not defined by IFRS. We believe Bitcoin and Bitcoin Equivalent Mining Margin has limitations as an analytical tool. In particular, Bitcoin and Bitcoin Equivalent Mining Margin excludes the depreciation of mining equipment and so does not reflect the full cost of our mining operations, and it also excludes the effects of fluctuations in the value of digital currencies and realized losses on the sale of digital assets, which affect our IFRS gross profit. This measure should not be considered as an alternative to gross margin determined in accordance with IFRS, or other IFRS measures. This measure is not necessarily comparable to similarly titled measures used by other companies. As a result, you should not consider this measure in isolation from, or as a substitute analysis for, our gross margin as determined in accordance with IFRS.

The following table shows a reconciliation of gross margin to Bitcoin and Bitcoin Equivalent Mining Margin, the most directly comparable IFRS measure, for the months of July 2022 and August 2022.

Inside Information and Forward-Looking Statements

Argo Blockchain plc is a dual-listed (LSE: ARB; NASDAQ: ARBK) blockchain technology company focused on large-scale cryptocurrency mining. With its flagship mining facility in Texas, and offices in the US, Canada, and the UK, Argo's global,sustainable operations are predominantly powered by renewable energy. In 2021,Argo became the first climate positive cryptocurrency mining company, and a signatory to the Crypto Climate Accord. Argo also participates in several Web3.0, DeFi and GameFi projects through its Argo Labs division, further contributing to its business operations, as well as the development of the cryptocurrency markets. For more information, visit www.argoblockchain.com.