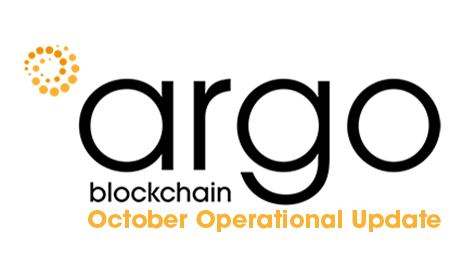 During the month of October, Argo mined 204 Bitcoin or Bitcoin Equivalents (together, BTC) compared to 215 BTC  in September 2022. The decrease in BTC mined was primarily due to a significant increase in the Bitcoin network difficulty in October compared to September.

As previously announced, the Company sold 3,843 new-in-box Bitmain S19J Pro machines which represented the last batch of the original Bitmain order scheduled for installation in October 2022. Consequently, the Company’s total hashrate capacity continues to be 2.5 EH/s.

Argo generated this income at a Bitcoin and Bitcoin Equivalent Mining Margin of 32% for the month of October (September 2022: 25%).

Additionally, the Company repaid the $6.7 million that was previously outstanding under the BTC-backed loan with Galaxy Digital. This is consistent with the Company’s risk management strategy and reduces balance sheet exposure  to downside BTC price risk.

The Company also wishes to respond to media reports falsely claiming that Hydro-Québec, the public utility for power in Quebec, has proposed to stop providing electricity to existing mining operations. The Company has spoken with representatives from Hydro-Québec and the City of Baie-Comeau, and is confident that its current access to power at  its two Quebec facilities will continue for the foreseeable future.

Argo is continuing to engage in financing discussions, as announced on 31 October 2022, and will update investors in due course.

Bitcoin and Bitcoin Equivalent Mining Margin is a financial measure not defined by IFRS. We believe Bitcoin and Bitcoin Equivalent Mining Margin has limitations as an analytical tool. In particular, Bitcoin and Bitcoin Equivalent Mining Margin excludes the depreciation of mining equipment and so does not reflect the full cost of our mining operations, and it also excludes the effects of fluctuations in the value of digital currencies and realised losses on the  sale of digital assets, which affect our IFRS gross profit. This measure should not be considered as an alternative to gross margin determined in accordance with IFRS, or other IFRS measures. This measure is not necessarily comparable to similarly titled measures used by other companies. As a result, you should not consider this measure in isolation from, or as a substitute analysis for, our gross margin as determined in accordance with IFRS.

The following table shows a reconciliation of gross margin to Bitcoin and Bitcoin Equivalent Mining Margin, the most directly comparable IFRS measure, for the months of September 2022 and October 2022.

(1) Due to unfavourable changes in the fair value of BTC there was a loss on the change in fair value of digital currencies in September 2022 and October 2022.
* Dollar values translated from pound sterling into U.S. dollars using the noon buying rate of the Federal Reserve Bank of New York as at the applicable dates‍
Inside Information and Forward-Looking Statements

Argo Blockchain plc is a dual-listed (LSE: ARB; NASDAQ: ARBK) blockchain technology company focused on large-scale cryptocurrency mining. With its flagship mining facility in Texas, and offices in the US, Canada, and the UK, Argo's global,sustainable operations are predominantly powered by renewable energy. In 2021, Argo became the first climate positive cryptocurrency mining company, and a signatory to the Crypto Climate Accord. Argo also participates in several Web3.0, DeFi and GameFi projects through its Argo Labs division, further contributing to its business operations, as well as the development of the cryptocurrency markets. For more information, visit www.argoblockchain.com.