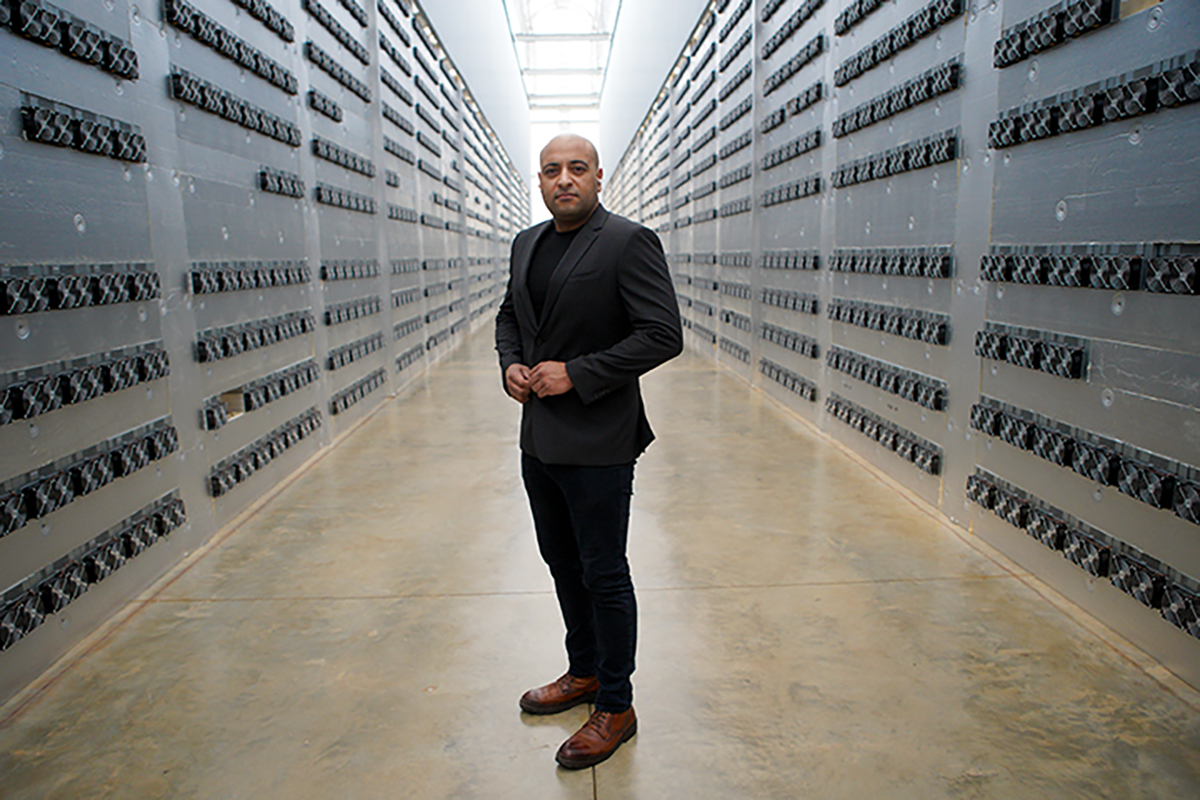 Perry Hothi is Argo’s CTO and runs the company’s mining operations. Perry works diligently to fine-tune the efficiency of the companies mining infrastructure to ensure the greatest margin possible given variables of price, difficulty and operating parameters. In this Q and A, we ask Perry what it means to be an efficient miner, and how he adjusts our mining hardware to achieve different outcomes depending on market conditions.

Question: What is mining efficiency?

Perry Hothi: Being an efficient miner means spending the least amount of resources – electricity in the case of a cryptocurrency mining – for the highest amount of computational power and therefore, mining rewards. This is usually measured on a watts/terahash (W/TH) basis. We use that metric in our profitability, our cost analysis – pretty much across the board.  At scale, we look at megawatts/PH, but when we’re optimizing a single machine, we’re focused on watts/TH.

Q: So, broadly speaking, what does it mean to be an efficient miner?

PH: First and foremost, being an efficient miner means making sure that you have the latest equipment optimized to run as efficiently as possible – or if not the latest gear, meaning the equipment you have is performing to the same specs as newer rigs.  The second option is better because you’re saving money and getting a much longer lifespan out of your equipment.

PH: A good number 2-3 years ago would have been between 100-150, if not higher. Today, the newest machines are in the 30s, representing a 3-4X improvement in efficiency.  That’s how quickly this technology moves.  If you can’t replace your hardware, you have to make your old equipment as efficient as possible in order to increase lifespan by 2-3X.  Otherwise, you face the prospect of having to purchase new hardware all the time.

For example, we purchased hardware that was at 60 watts per terahash when it first came out which was considered quite good at the time as the Bitmain S9’s were in the 80W/TH+ range.  As time progressed, newer technology came out and we started seeing machines dropping into the 50W/TH range, then into the high 40’s, and eventually, we were able to get these same machines, which were still profitable, down to the 40W/TH range.  That equates to almost a one-third decrease in power usage which makes all the difference when it comes to machines running profitability or not.

Q: How important is hardware?  Does it all start with hardware?

PH: Hardware is obviously really critical. You can make optimizations through software but you can’t physically change anything.  You’ll always hit a limit.  At the end of the day, there’s a reason that all computer manufacturers – whether it’s Apple, IBM, or Intel – are always opting for higher efficiency chips. There’s only so much you can do with inefficient chips.  Once you’ve exhausted something and optimized it as much as you can, then the new architecture comes in.

Q: Can you tell me a bit about the history of mining hardware?  In particular moving from the 16 nanometre chips to 7nm chips.  How is ASIC mining evolving?

PH: ASIC machines started with 28nm chips and at the time the GPU rigs were using them too. However, the S9’s were the big breakthrough, at 16nm. So you had the 16nm, then 14nm, and some people had the 12nm.  The difference is when you get these newer chips they’re not optimized out of the factory.  Typically that’s because of a rush to market for the new technology and therefore a lot of efficiency is found later on down the road.  There are two ways to go about finding those efficiencies – one is to wait for the manufacturer to put out updates.  The second is to look for it yourself.  We’ve gone down the second road.

Q: Why is the chip size so important?

PH: It just comes down to physics.  The smaller the transistors, the more transistors you can pack on a chip and the less electricity they consume.  The chip becomes more efficient.

Q: Hardware isn’t the only element of efficiency, there’s also software.  Can you talk to us a little bit about the kind of software adjustments that you can make to optimize machines?

PH: There’s lots you can do. For example, the T17 machines that we use have 30 chips per board.  When these machines come from a factory, they have to be a one-size-fits-all solution.  Bitmain will divide the T17 into three basic groups: the 38TH, the 40TH, and the 42TH.  The machines themselves are identical.  It’s the quality of the chip that differentiates them. They test them and they have to set a pretty high base voltage limit in because the least stable chip is what they set for.

What we’re able to do is tune each chip individually.  And if we need to change the frequency across one without sacrificing the performance of the others, we can do that.  So instead of just increasing voltage for the worst chip, we basically tune for the best chip and then we can decrease the frequencies of the ones that can’t keep up.  This makes a big difference.

Q: How do you make those kinds of adjustments?  What’s the process of optimizing a machine look like?

PH: It’s a lot of trial and error.  Without giving away all our secrets, we are essentially studying kernel logs and pattern recognition.  We are monitoring how the machines perform at different voltages, frequencies, and temperatures.  It’s possible that stability is a big issue.  Then when the machine itself is what we call autotuning – or looking for that – we tell it to execute certain algorithms such as how many voltage steps or frequency steps to drop down.

Again, we don’t want to give everything away.  But basically what this process achieves is trying to find the lowest stable voltage.  How we do that is our secret.  I’d also add that when you’re running these lower voltages – which are on the ragged edge of stability in terms of reboots for example – something that makes a huge difference is clean, filtered air.  This is where our partners really come through.  Dirty chips heat up.  Meanwhile, ours are clean so they run cooler and more efficiently.  Less voltage and less power equals increased efficiency and increased profits.

Q: How do Argo’s machines compete in terms of efficiency with other machines that are out there?

PH: I can only speak to the machines that manufacturers are selling because I don’t know what other companies are doing.  I can only go by what they advertise on their websites.  Currently, if we look at what everyone else has on their site with regards to megawatts and petahashes, we are near the forefront in terms of efficiency for what we can produce for the power we consume.

Q: People often look at mining rigs as these robots that are just all doing exactly the same thing.  But it’s a little more subtle than that.  These rigs each have their own machine and each chip has its own peculiarities and idiosyncrasies, right?

PH: Absolutely.  And this is where I may sound a little nutty, because I do talk to the machines every once in a while.  It sounds weird, but the machines are all different, even though their specs are the same.  What I like to say is that there are four or five different types.  These include your straight-A students, your average students, and your trouble makers.  So we really have to get those troublemakers up to speed because they consume a lot more power and demand a lot more of our attention.  They’re the ones that are either going to make or break us.  Because if we don’t pay attention they will either consume way too much power and we’re going to lose money, or they won’t be as reliable and stable as we need.

When you do this long enough you can look at the voltages that are required to run a certain preset, and you know right away what the other voltages are going to be.  We’re planning on using AI for this in the future, but right now it’s been a lot of trial and error, pattern recognition, tracking on Google Sheets, whatever it takes.

Q: One of the things that we pride ourselves on at Argo is that we’re very hands-on miners.  We don’t just ‘set it and forget it’.  And that’s really driven by your expertise and your personality.  Can you talk to me a little bit about why you think it’s important to monitor, manage, and optimize our machines so closely?

PH: Things are always changing.  These machines are so new and we are always putting in new software, optimizations, etc.  You might think something is great today and realize the ill effects of it two weeks later when the machines aren’t responding the way you thought they would.  While it is easier to set it and forget it, it’s not the best approach.  Our job is to be miners and we’re focused on being the best at it.  If that means paying a little more attention to those troublesome machines or taking the time to learn from the ones that run more efficiently and applying that to the others, so be it.

But it basically boils down to endless curiosity and always striving to make them run better.

Q: What trends do you see in the future – both in the short term and long term – for ASIC mining and specifically for improvements in efficiency in mining?

PH: Without being able to see into the future, my best guess would be that machines are going to continue to get more efficient.  Yet, as of today, nobody’s really challenging Bitmain on their new 7-nanometer tech – it’s impossible to get the fab time.  Just like Intel had no competition for a while from AMD until AMD stepped up their game, eventually I think someone will come out and challenge Bitmain.  But until that point, we are all dependent to some extent on what they release.  They had some issues with some of their machines when they came out early on, but they’ve definitely stepped it up with their new set of S19’s.

I think mining is going to get bigger and more industrialized, with bigger players and thinner margins – in fact, we’re already seeing this.  That’s where every little difference – small or big – can make a huge impact. And that’s what I try and do every day with my work.