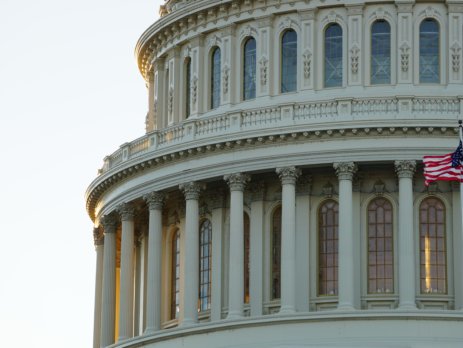 What does Bitcoin have to do with infrastructure? Objectively, not a lot. However, a new bill introduced by the U.S. Senate links the two together. Here’s how the world’s most popular cryptocurrency became a core element of the capital expenditure plans of the world’s largest economy.

The Infrastructure Investment and Jobs Act

This week, the Democratic-controlled US Senate passed The Infrastructure Investment and Jobs Act (HR 3684) with bipartisan support. The bill proposes extensive investments in America’s roads, bridges, railways, and broadband network.

Compromises from both sides of the political aisle helped the bill pass with a 69-30 majority. The bill will now make its way to the House before ultimately being signed into law by the U.S. president.

If passed in its current form, the bill will allow the U.S. government to deploy roughly $1 trillion in capital expenditure over the next few years. This includes $17 billion in port infrastructure, $25 billion in airport maintenance, $100 billion for an extension of the broadband network, $66 billion in rail infrastructure, and $110 billion for roads or megaprojects.

However, the bill doesn’t just outline expenses but also ways to generate revenue to fund these ambitious projects. Much of the trillion-dollar spending plan will be funded by government deficits and economic growth, but some of the funding is to be derived from new taxes on the emerging cryptocurrency sector. That’s where Bitcoin comes in.

Within 12 years, digital assets have become a $2 trillion industry. This segment of the economy now includes multibillion-dollar corporations. Regulators believe tighter reporting standards and transaction taxes on this sector could generate up to $30 billion in additional revenue for the government.

The bill proposes new definitions for market participants, tougher reporting standards, and a tax levy on cryptocurrency transactions on regulated platforms. However, some industry veterans argue that the bill’s proposals are technically flawed and misunderstand the way blockchain networks function. Coin Center executive director Jerry Brito called some of the proposals, “nonsensical from a technical perspective… very likely [to] be unconstitutional surveillance.”

The bill could be amended before it is presented to the House later this year.

While the bill burdens Bitcoin operators and emerging startups with additional regulations, it’s also a signal that the industry has finally moved into the mainstream.

A robust regulatory framework and inclusion in the tax system legitimize Bitcoin’s position as a new asset class. Meanwhile, the bill’s technical flaws have encouraged industry veterans to boost their lobbying efforts. The Blockchain Caucus is now advocating for amendments that could make compliance easier and ensure that the bill doesn’t hinder innovation in the digital assets sector. In other words, the Bitcoin community is now proactively working with the government to pave the way forward.